Motto: Cars Go Fast
This Column is long, but I think it's more interesting than my average post. Don't be offput by the following wall of text.
In the last 20 years communications technology has advanced with a screaming pace. 20 year ago today, we had a landline in each household along with a phonebook and everyone got a newspaper to get the news. Today, each person has their own phone that they carry with them. That phone gives them access to the biggest, fastest growing library of information ever collected known as "the Internet". Now let's look at transportation: 20 years ago today, Ford made an f150 truck that got around 18 miles to the gallon and could tow 15000 pounds. Today, Ford makes an f150 truck that gets around 19 miles to the gallon and can tow 15000 pounds.This is just ONE vehicle, but it represents the point I'm trying to make. The improvements we've seen in transportation have been anything but awe-inspiring. More like "ahh" than awe. Where's our hoverboards? Where's our teleporters? We Were Promised Jetpacks! The most basic, fundamental reason humans need transportation is because things are in different places... and we need to move people and stuff between these things. The problem is this: our transportation methods suck. Almost all the way across the board, they suck. They are inefficient, resource hungry, bad for the environment, dangerous, and in general, don't impress me. Automobiles in particular... suck. Let me expand upon that: Inefficient: The purpose of a vehicle is to move its passengers and cargo from here to there. The point of a vehicle is not to move the vehicle from here to there, that's just a characteristic of how vehicles work. At my heaviest, I weigh about 225 lbs. According to the Goog, my car weighs a bit over 3375 lbs, but we'll use that number because it makes things round. The combined weight of my car and me is 3600 lbs. My car weighs 15 times more than me. That means that I use 15 times MORE gasoline moving my CAR down the road than I do moving myself. Using these numbers, 93.75% of the fuel I use is going towards moving the vehicle I'm in (which is not the point) from here to there, while only 6.25% of the fuel I use is going towards moving me (which is the point). Now let's generalize that a bit. Taking average numbers I found online, then inserting margins of error to find the BEST CASE SCENARIO (maximize cargo weight to vehicle weight ratio) - Average # occupants per car: 1.3 people, we'll use 1.5 Average weight of a human in the US: 180 lbs, we'll use 200 lbs Average weight of an automobile in the US: 4000 lbs Average weight of an automobile + its average passenger load: 4300 lbs Let's be generous and assume there's 100 pounds of non-human cargo in any given car (groceries, a bike, your cat, whatever) - average weight of an automobile + its average cargo: 4400 lbs. % fuel toward moving the automobile: 91% % fuel toward moving the cargo: 9% So then, automobiles are 9% efficient? Not even close. Depending on where you read, modern internal combustion engines have peak efficiencies around 25-30%. So that 9% is more like 2%. But that's peak efficiency. Take into account average efficiency and you're looking at efficiencies closer to 1%. So, of that gallon of gasoline you just bought for $3.69 (the nationwide average as of today), 4 cents of that ACTUALLY went toward moving you and your cargo from here to there. The other $3.65 was wasted. Makes you kind of not want to drive anywhere anymore, doesn't it? Resource hungry:
Automobiles use oil. The US alone used an estimated 1.345 billion gallons of oil in year 2013 alone. That's a pool nearly a half mile wide by a half mile long by a half mile deep. That volume is approximately equal to the total volume of all humans alive on planet earth.

"What's a velomobile?" Basically a recumbent bike with a case around it: 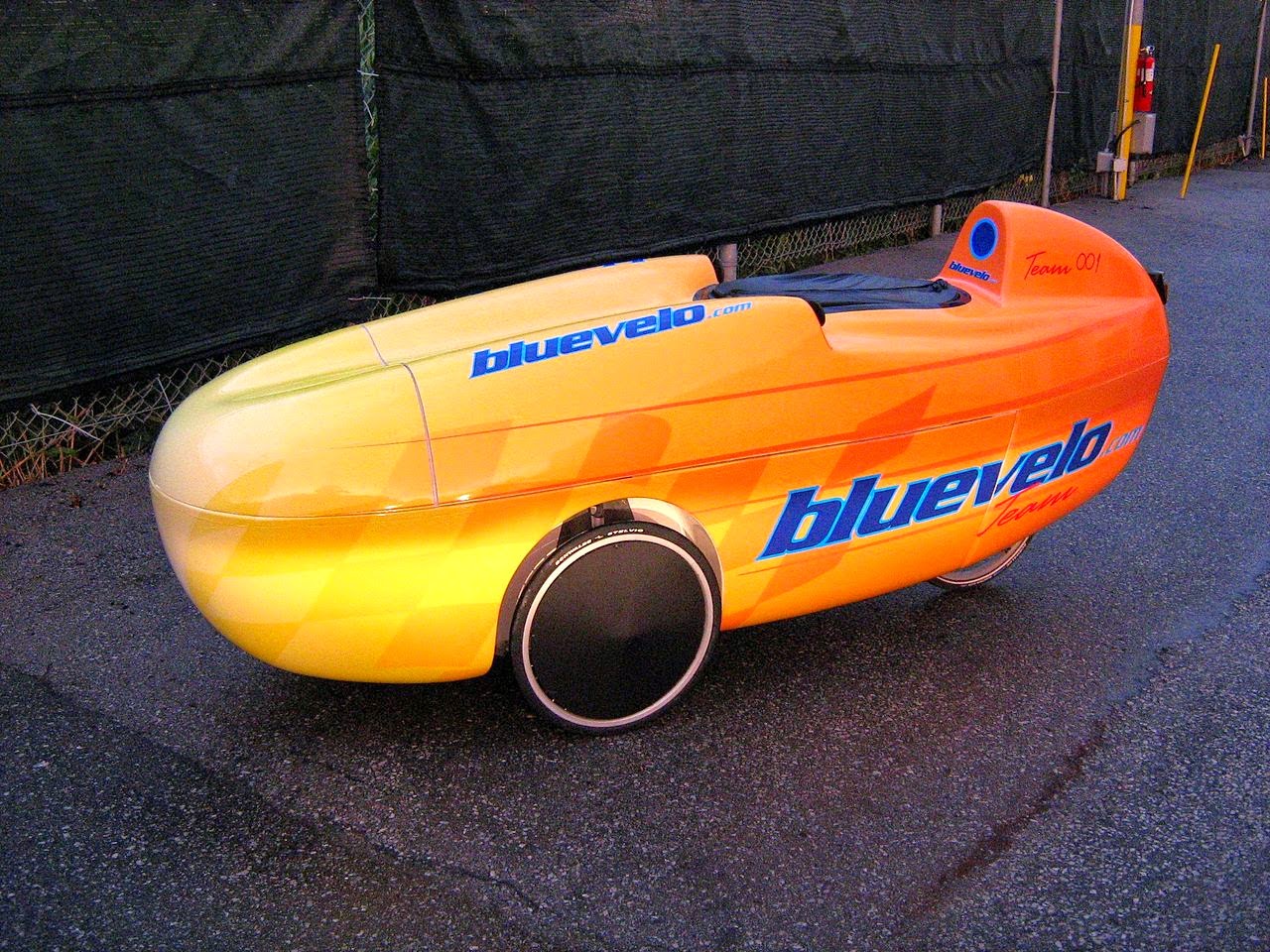 Quote: “Wow. Cool guy.”- Anytime some guy drives by and guns his engine to show how macho he is, most people say this (most people I know) -