Motto: The Project Project is Projected to be a Success

I do projects. That's what I do.
This post will be written in a Buzzfeed-type fashion. A list of things with a picture to represent each thing. Basically I'm serving up Facebook sharing gold here.
A list of the Medium-to-Long term projects I am working on (in some capacity): 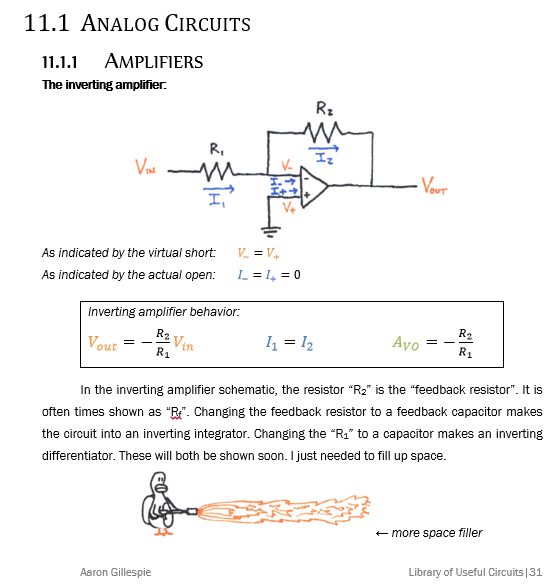 Think of it as a personal wikipedia, written entirely by (and for) myself, covering the scope of things that I learned in academia. One day I realized that I wasn't going to retain everything I ever learned, but I was pretty good and taking what I learned, organizing it, and presenting it in such a way I could relearn it quickly. The project is still in its early beginning stages even though I started it over 3 years ago. One day I'll pick it back up and keep going with it. Then I'll give it to my children, who will find it very helpful (provided they study Electrical Engineering). 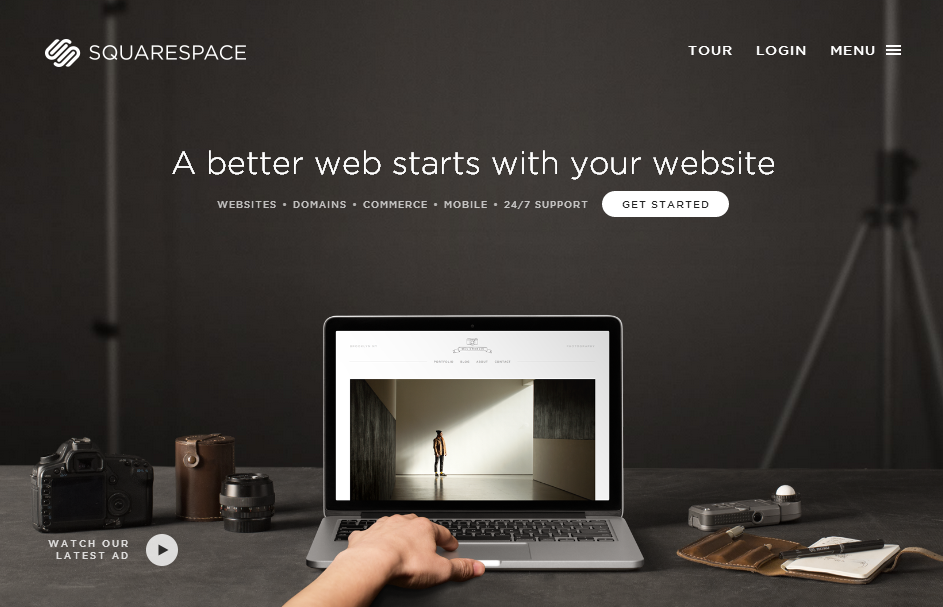 http://aarongilly.com or http://wvz7x7.com or whatever - a legitimized website version of the Column with bonus whatever else I feel like putting up there.

I have given a brief history of the Column several times throughout the Column (there's a whole "meta" tag for a reason). Basically, it all started with a geocities site. Then Xanga. Then a website. Then Tumblr. Then this Blogger. All previous instantiations of the Column are long gone. I'd like to go back to a website now that I have an idea of what I'm doing. Incorporate videos, projects, blogs, pictures, whatever I feel like. Yup. I stole the idea for "My 24th Year" from a video called "What Madeline Did in 2011" that I found early on in 2012. I'd link to her video, but it's pulled down. You can find re-uploads of it if you Google it, though. Either way. I successfully filmed every day last year and put together my favorite video I've ever made. I'm 54 days away from completing "My 25th Year". That means I"m 55 days away from starting "My 26th Year". I don't plan on stopping this project any time soon. Maybe at my funeral there will be a screening of a (hopefully) super long video where you can see snippets of my entire life. Maybe not. 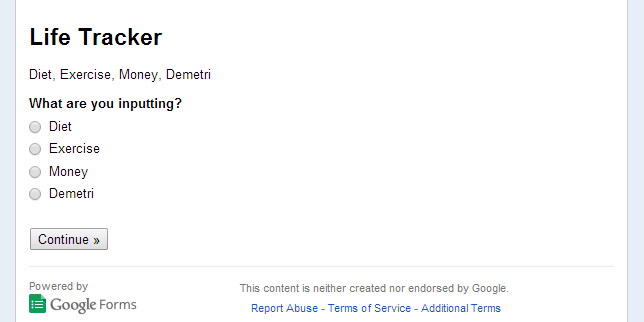 The Life Tracker - My running "track ALL the things!" project.

A year and a couple of months back I had an idea for a huge project: a one-stop-shop for tracking everything in life that I was letting run away from me. Over the next few weeks I learned how to write scripts for Google Spreadsheets and Google Forms and threw together the Life Tracker. It has been expanded upon and improved for over a year now. I've managed to track about 75% of the weeks between its initial inception and today. In fact, today is marks the end of my 40th week Life Tracking. Thanks to this project I can tell you that I eat 2635 calories/day on average. Those calories are 34.5% from fat, 45.2% from carbohydrates, 19.9% from protein, and 0.4% from alcohol (I only know that one because of the process of elimination). I work out 2.4 times per week (not enough). I spend too much money. I am better at accomplishing managerial and social tasks than I am mental, physical, and work related ones. 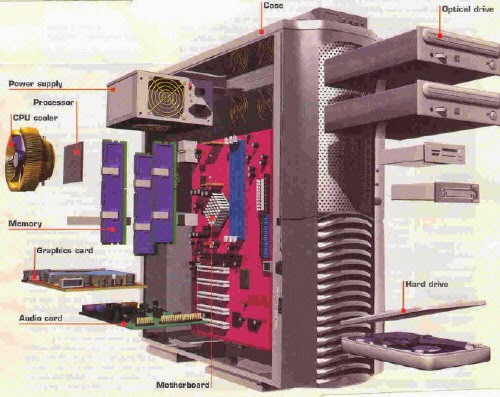 Build a Computer - from scratch ("scratch").

I know phones pretty well. I am alright with tablets, too. I do not know computers. This is pretty bad for a guy who studied Computer Engineering for a few weeks (in my defense, I did change majors for a reason). I want a future-proof rig built around my personal tastes and needs. That is to say, one with a boatload of storage and the internals necessary for prosumer-level video editing. I think I'll be a videomaker for quite some time into the future. 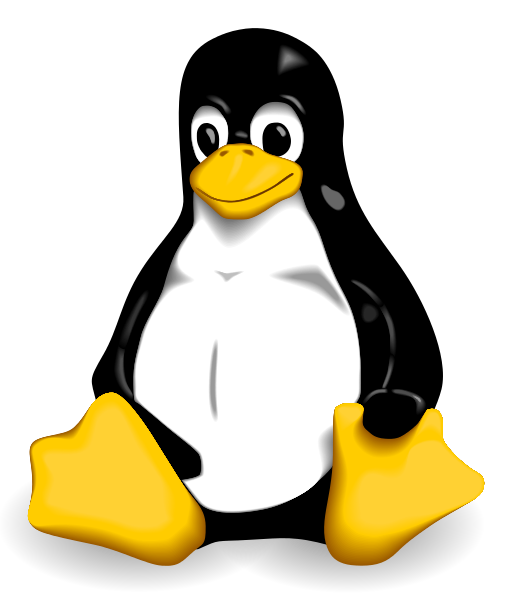 That was stretch. Anyway, I don't like Microsoft anymore. I don't want to depend on any of their products in my everyday life. While I do a hefty portion of my computing on my Chromebook nowadays, Chromebooks will probably never full encompass all my computing needs. I'm mostly interested in Linux at this point, but I haven't ruled out joining the legions of Apple users, either. I'm waiting for Elementary OS ISIS to come out and My 26th Year video to come to a close before I start considering the switch. A major limiting factor right now is the decrepit state of Video Editors on Linux. I will retain hope. 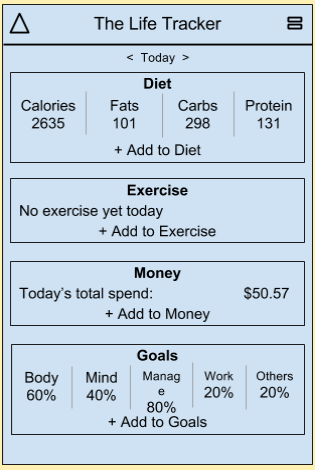 I am a huge fan of Android. I have coding experience. Why don't I write applications for Android? That's a great question. I've taken preliminary planning steps towards my ultimate goal of creating a better Life Tracker as an Android application. I could write a whole post about my plans for this, but I'll just leave it off with the rough screen mockup from above. I'm waiting to set up a coding environment until after Google I/O at the end of this month... also maybe until I make the switch from Windows to something else. Maybe I'll develop on that Linux computer I'm going to build from scratch, eh? 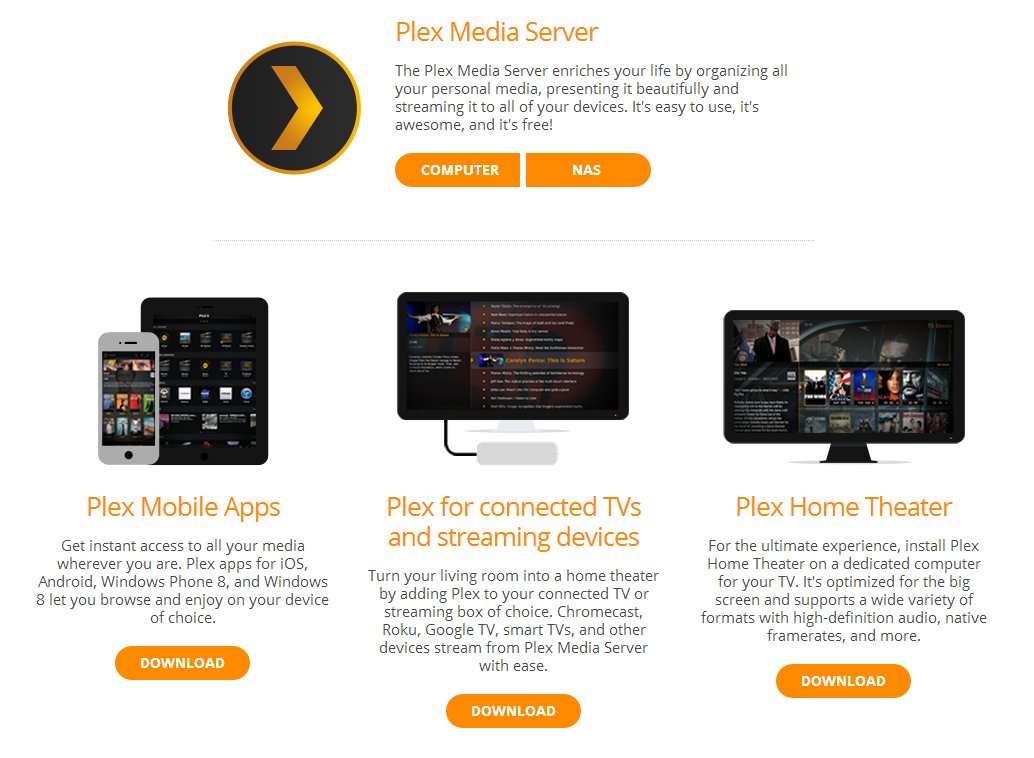 Set up a Home Media Server & combined digital library - I should be able to see my own content on all my stuff.

Melissa and I have developed a respectable collection of photos, music, and videos. The problem is that those things exist in little silos on our computers. I can access her music. She can't access my photos. Neither of us can watch the dumb videos I make on our TV (unless we go through YouTube). I have digital copies of my entire DVD collection that do me no good. I want to set up a Home Media Server - likely using PLEX. I want to create higher-quality digital copies of my physical media. I want to buy all of the Marvel Cinematic Universe on Blu-Ray and digitize it. I'm not sure which type of implementation I'd like to pursue - Network Attached Storage or just running it off a computer. Maybe I'll run it off on that Linux computer I'm building from scratch to use for Android Development?

Learn to Music - I fully anticipate the .gif above will embarrass my wife.

I am married to a Music Teacher/Therapist. My wife can play instruments I've never even seen before, my father-in-law plays in a band from time to time, and I can't keep a steady beat to save my life. I want to learn how to play enough music to actually enjoy my time with a guitar/piano/whatever. I'd love to be able to record music with Melissa someday. Right now, I'd be about as useful as a goat in a recording studio. Maybe I'll be able to record and mix music on that Linux computer I'm building from scratch to use for Android Development and Home Media Serving? 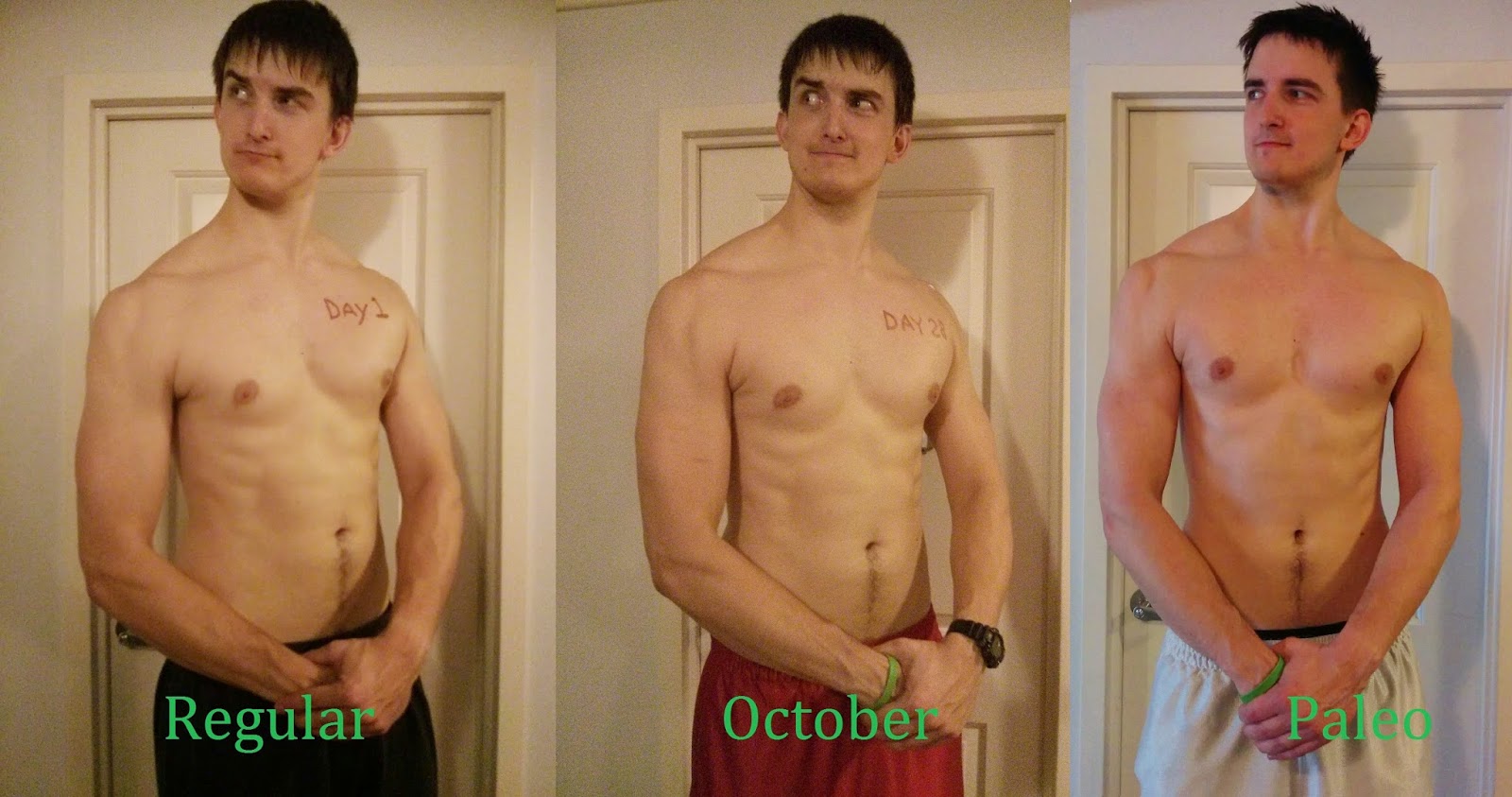 October of last year: Eat a ton of protein and workout 5 days a week - success!
January: Paleo + CrossFit - success!
February: Read 5 books - read 3 books
March: Write every day - success!
April: Run 50 miles - run 15 miles and stop for the rest of the month
May: Enjoy myself - massive runaway success!
June: A GoPro a Day - in progress
July: ...because I haven't figured out my Top 5 yet, I'll utilize it for future 30 Day Challenges. 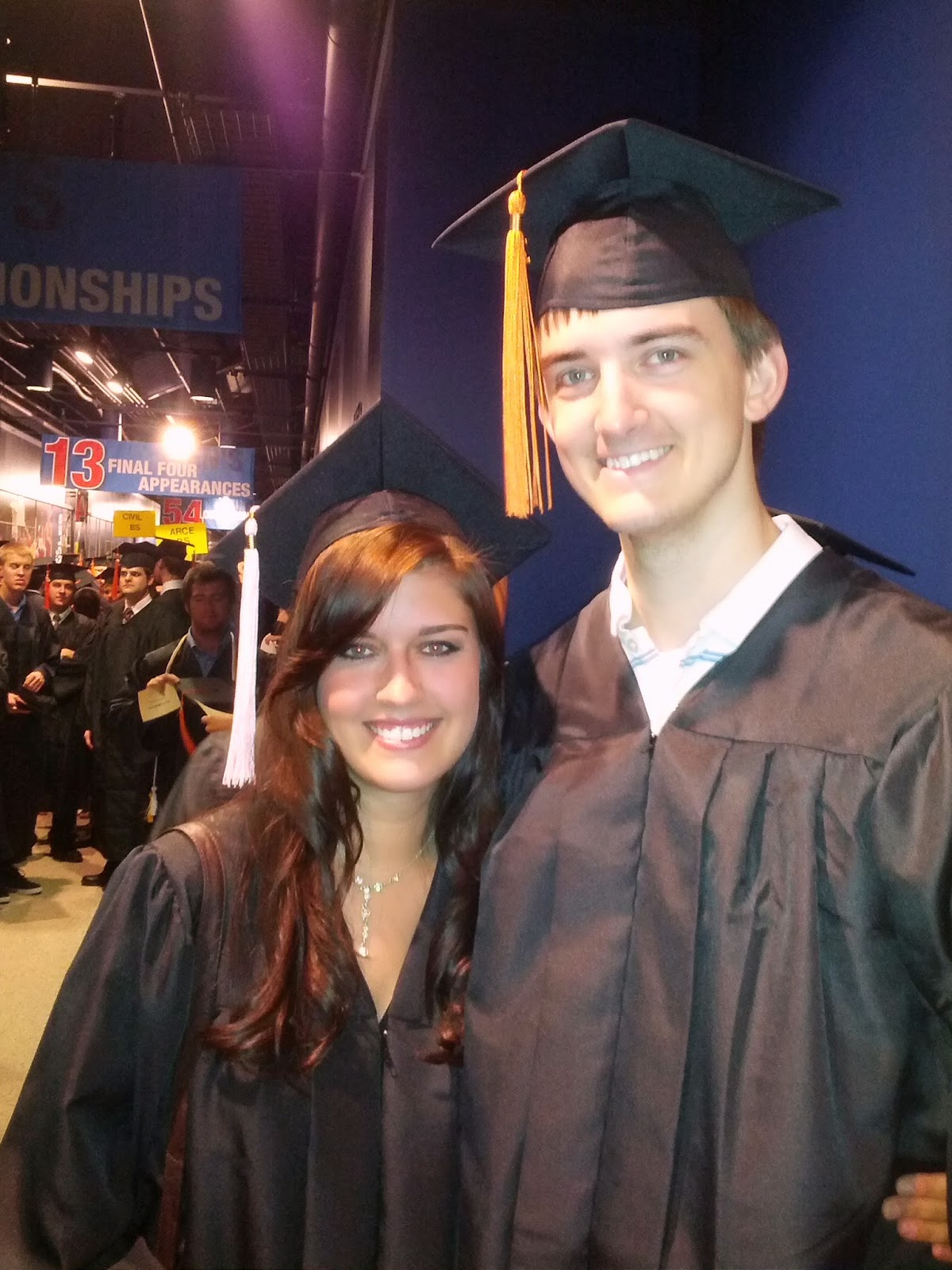 Graduate School - this is a project, right?

Both Melissa and I want to put ourselves through grad school (because we're simultaneously dumb and smart). This deserves to be on this list because it's on the list I've had on my phone for the past couple of years.

Top 5: Future 30 Day Challenges
5. No Reddit, Social Networking, Videogames, or Television4. Become a Yes Man3. Spend an Hour Outside Every Day2. Eat Out Zero Times1. Accomplish One of the Projects Listed in this Column
Quote: “At first it's like beer fruit loops, but then it's just fruit loops fruit loops.”- Melissa -