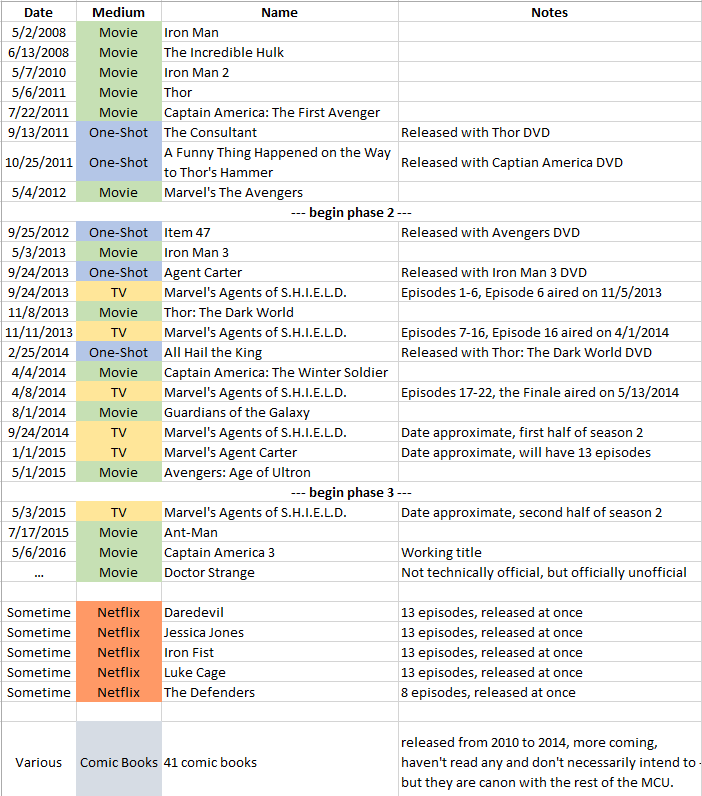 So, that's where we stand. Captain America: The Winter Soldier was awesome. I'm saddened by the fact that I've only seen it once. It is in my top 3 favorite entries into the MCU thus far. It was a great story, with perfectly done action sequences, and with (thanks to the disestablishment of S.H.I.E.L.D.) a huge impact on all subsequent entries into the MCU. No place else was that impact more heavily felt and readily apparent than the TV show "Agents of S.H.I.E.L.D.". Despite it's name, the show wasn't blindsided or hurt by the events of Captain America. In fact, much the opposite is true. They knew it was coming all along. The haphazard start to the show had was a necessary evil to setup the awesomeness of the second half of the season. Everything changes. It retroactively makes the first half of the season much better. It even kinda/sorta/maybe sets up the upcoming Guardians of the Galaxy. I will drop back in with my thoughts on that movie (and my 26th birthday, and my 2nd Second-A-Day video) in early August.

Top 5: Current/Future Superhero Universes in Cinema
5. Fox is planning to reboot the Fantastic Four in 2015. Who knows if they will try to shoehorn in some sort of "extended universe" play. I'm going to guess they will do whatever they can to make money.
4. Sony's currently active "Amazing Spiderman" series starring whatshisface from The Social Network. Andrew Garfield. They have some longevity built in, with storylines plotted all the way out to 2018. They want to build out parts of the Spiderman Universe that don't directly involve Peter Parker (such as a movie dedicated to Venom or the Sinister Six). That's a good thing because Andrew Garfield has already expressed some desire to leave the character behind. I didn't bother watching "The Amazing Spiderman 2" in theaters (which is saying something, cause I watched everything else out at that time).
3. DC and Warner Bros are desperately trying to make the Justice League the "Pepsi" to the "Coke" Marvel provides with the Avengers. This technically started with Henry Cavill in "Man of Steel", but will really start with the currently filming "Batman Vs. Superman: Dawn of Justice". I've read they will be exploring a single story arc that takes place across 6 movies. Frankly, I don't think the Justice League plays out nearly as well as Marvel's Avengers. Too many capes, maybe.
2. Fox's X-Men series. Really, this might deserve to take the top spot on this list. 2000's "X-Men" is the superhero movie that is widely pointed at as starting the superhero craze that we've been in for the past 14 years. They've managed to keep the same cast and keep the same storyline for 14 years. Even with the noteworthy low-points, that an impressive accomplishment. They have between 2 and 4 more movies planned in the X-Men universe. "Days of Future Past" kind of hits the reset button on their story arc, though. So, we'll see how they go about rebuilding things.
1. Marvel and Disney's "The Avengers" series, a.k.a. the Marvel Cinematic Universe. They started it all off with Iron Man in 2008. The plan was to build out franchises of superheroes that were aware of and could meet one another... all culminating in "The Avengers". That was immensely successful, so they began thinking more long-term. They have movies planned out "as far as 2028". If they keep putting movies out at their current pace, that means they've got about 18-19 more movies planned out. Frankly, I'm nervous they will start to sour after "The Avengers 3". How do you keep going after something that huge?
Quote: “I know what it does.”- Phil Coulson -