Motto: My phone is running Android 4.1, you jelly?

There is no target audience for this post. Unless you care about the new android update intensely, you shouldn’t read on. This excludes everyone that I expect might tune in on a semiregular basis… hence no target audience. This is for me.

This is more of a test update than a real column. I have decided to dictate this entire post to my phone. Starting in ice cream sandwich you were able to dictate and watch the words appear as you said them. Starting in jelly bean, I plan on actually using this feature. Partially due to the siri like feature that was added. Google knowledge graph makes for a quick responses to most general inquiries.

Going back and rereading that paragraph, it is obvious to me that I speak differently than I write. Perhaps because I get the chance to think a little more when I’m typing that I do when I am speaking. Who knows. Google I/O has got me all jazzed on technology. As most anyone who knows me would say, I don’t need an excuse to be more of a technophile or a Google geek… but the feeling has been raging inside even more than usual since the first time I turned on the live broadcast of I/O. Just tonight I rooted my phone and flashed an early build of Jelly Bean. I gotta say, its nice. Its really nice. See the soon coming Top 5 for more details. I have decided I really want a pure Google experience. I elected not to reinstall many of the apps I used so much. I’m going to run a week long experiment without my Beautiful Widgets clock and weather home screen. Without a 3rd party calendar widget.

I have decided I most definitely am getting a Nexus 7 tablet when it releases. If I have to sell my transformer to do so, so be it. I want something lighter anyway. And mostly I want the nexus purity. I understand how Apple fanboys must feel.

This throws me in a couple weird situations… Google has taken to replicating the functionality of what used to be third party only functions. There is now a music recognition capability baked right in to the operating system. No need for sound hound anymore I guess. Even more vexing, Google drive and dropbox. Dropbox is great at what it does… but it does nothing more compelling than Google’s drive other than offer me a few extra (hard earned) gigs of storage. I hate having two things to perform one function… something is going to give eventually. 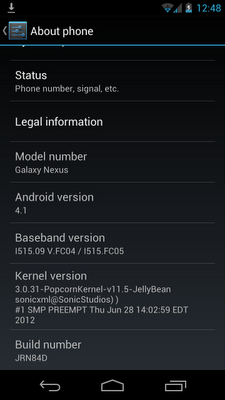 My sister is getting married in a little over a week. You should anticipate me talking about that soon. Lastly, I’m updating this from the blogger mobile app. So I’m not sure how this is all going to turn out… especially the picture I attached.

“Why would you want to do that?” both my parents and my girlfriend when I told them I wanted to get a new android tablet in place of the less than half a year old one I have now (they all came to see the light after I bored them about it for ten minutes)