Motto: I'm Really Proud of the Title of this Post

Melissa and I finished our first 30 Day Challenge. Today's post will be a comprehensive review of the Paleo (+ CrossFit) challenge. For this and all future challenge posts I'm going to be using the new tag 30DAYS. That way at the end of the year you'll be able to find all the 30 Day Challenge posts easily.
The Challenge
For thirty days, we followed the Paleo diet. This diet consists of foods that man from the Paleolithic era would likely have eaten. It removes many major staples of the Western diet - namely grains, milk, legumes, potatoes, refined salts, refined sugars, and many other things.
As a supplemental goal (with an emphasis on the "mental" part), we started CrossFit. CrossFit is essentially a high-intensity approach to achieving optimal functional fitness in a minimal amount of time. You do heavy, compound lifts as quickly and as often as you can manage with proper form.
The Hard Results
The numbers don't lie. I used the Life Tracker to quantify the last 30 days, which allows me to draw the following objective results.
Cheat Meals:
I had 17 cheat meals. The Paleo book I read suggested sticking to a 85/15 ratio. In order to meet that, I should have only had 14 cheat meals. Realistically, I only had 3 more than I should have over the course of a month; so I guess I'm pretty pleased with how well I stuck to the program.
Dietary Results: 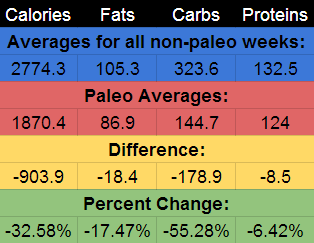 In the figure above, all the numbers in the blue represent the averages from first 6 months of Life Tracking. They do not include my Paleo numbers. The Paleo averages are universally less than the non-paleo averages, but not everything lowered by the same amount. My proteins and fats stayed much more constant than did my calorie and carb intake. I dropped my average number of carbohydrates to less than half of what they were. The sad part is that I still had more carbs than anything else.

I think in a true Paleo diet, you'd be getting much fewer carbs than I did. You are supposed to limit the amount of fruit you eat - which I didn't really do. I had fruit smoothies more than once a day on average. I expected my fat intake to go up, which it didn't. I think that's probably because I removed milk from my diet.

No matter what, my daily caloric intake dropped below my Total Daily Energy Expenditure (as calculated by 4 of the most refutable sites I could find on the subject). I was running at a nearly 900 calorie deficit over the course of a month. So, thanks to the laws of thermodynamics, I lost weight.

I lost ~5-10 lbs. I wish I could tell you my more advanced health metrics, but I didn't have any bloodwork done. To make up for that, here's a gratuitous measure of my bodily results: 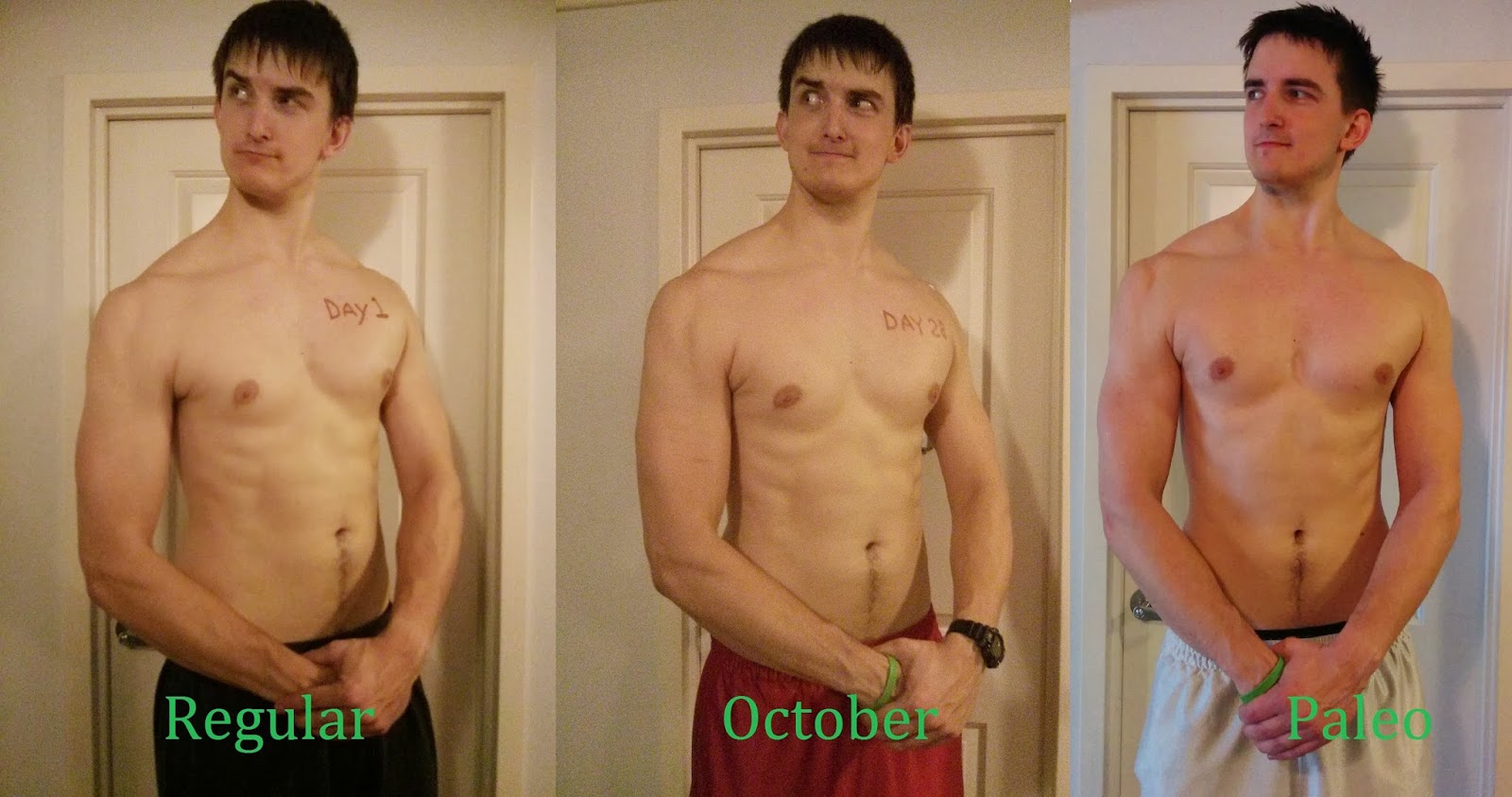 I'm disappointed with how the photo turned out, to be honest with you. I blame the change in lighting. The abs are there IRL. TMI? LOLYOLO #FTW. Also, thanks to smaller lovehandles and a slightly broader back, my entire torso is slightly more V-shaped than it used to be, which doesn't show in that picture either.

My average number of Demetri goals completed per week rose by ~5%. That's not significant enough to go into in further detail. Also, eating paleo turned out to be marginally cheaper than not doing so over the course of the month. Largely thanks to the limited number of trips to restaurants.
The Subjectivities
So those were the hard number results, but how did living Paleo feel? That's the real question - and that's what I really want to talk about.

Melissa and I talked at length about how Paleo changed our daily lives. All the changes were much more obvious at first than they have been since. This could be because our bodies have gotten used to the diet and have reverted back to their old ways - or it could be that we've mentally gotten used to the changes. So, what changed?

Sleep:
It came easier. It lasted longer. Waking up came easier (although it was still difficult some days). I became much less reliant on caffeine throughout the day. I didn't feel much of a need for it. It helps that I don't like coffee much, and that's pretty much your only Paleo caffeine option.

Stomach/Gastrointestinal Tract:
Our guts were calm the entire month. Never once did either of us feel bloated or queasy. We both agreed that trips to the restroom had become noticeably more pleasant and consistent and then agreed never to talk about it ever again ever.

Today was our first non-paleo day. We had pizza. We both feel awful. I don't think that's a coincidence.

Palate:
The food we eat normally is crazy sweet. For one of my cheat meals I cheated on almond butter and instead ate peanut butter. It tasted like pure sugar. It was ridiculous. Thanks to the high-nutrient-density of the foods in the paleo diet, we got full faster and ate less. The meals were every bit as varied as our normal diet, too.

It's basically impossible to eat paleo anywhere but your own kitchen. That sucked and is worth mentioning.

Extra-bodily Affairs:
Melissa and I learned a ton that we wouldn't have otherwise learned. We learned how to cook. We learned how to make healthy food. We finally went to the Kansas City River Market. It's one mile away from our place and it's awesome and we never went there before. That was a run-on sentence that ended with a preposition. That was a declarative sentence that ended with the word "preposition".

What was I talking about?

We learned a valuable lesson about grocery shopping. If you don't buy crappy food, you won't have crappy food around to tempt you. If you only buy meats and vegetables, that's all you'll have to eat. It's that simple. We learned to be more creative with our choices and more conscientious of what we put in our bodies.

CrossFit:
CrossFit is hard. I mean it is really, really difficult. Melissa and I are both tall and slender, which makes it especially difficult. If I'm doing thrusters (front squat which transitions into an overhead press) I'm moving the weight over 6 feet. Your shorter, more typical lifters are going 4.5 feet. That means I'm doing 1/3 more work, scientifically speaking, per rep.

Even if I was built differently, CrossFit is just hard, dude. I'm still sore from 4 days ago. No joke.

I'll write more about CrossFit in my conclusion. When you write papers, you aren't supposed to introduce new information in your conclusion. I follow my own rules. #toughguythugmaster.

The Conclusion
Paleo is a great experiment. I honestly and truly believe everyone could stand to benefit from giving the paleo diet a chance. I learned so much from my experience.

The Good: Paleo
I learned how to cook dozens of new meals, all of which are very, very healthy. I learned that I can enjoy healthy foods. My diet overall has way too many sugars. I lost weight. I didn't lose muscle. I slept better and felt better throughout the day.

The Bad: Paleo
I had to remove a lot of things that I don't truly believe are bad for you. For example, milk. Milk is natural. You feed it to babies to make them big, strong, and healthy. I don't follow the logic that makes milk bad for adults. Melissa refused to remove rice from her diet (although she did cut down), and I don't blame her.

I don't buy the concept of paleo wholesale. While I do believe it's a much healthier diet than our typical Western one, I don't think it's the most healthy thing you can possibly do. I do believe that humans have adapted some in the past 10,000 years to eat things like rice, wheat, cheese, etc. Sure, some humans can't have those things... but I don't consider myself one of them.

The Good: CrossFit
CrossFit is a spectacular workout. They push you really hard. The community at the gym we go to is seriously phenomenal. The trainers are always right there, watching over you with a positive, helpful reinforcement. The whole place makes you feel like you are part of a team. You feel alive when you walk out the doors. Interestingly, you also feel dead.

CrossFit opened my eyes to a huge part of fitness that I was ignoring. It used to be that I could lift heavy weights OR jog for a long period of time. CrossFit made me realize how terrible I was at any combination of the two. From now on I will incorporate some form of CrossFit-like High-Intensity Interval Training into my workout routine. It really is the best way to achieve a high-level of overall physical fitness while keeping your workout frequency and duration at reasonable levels.

The Bad: CrossFit
CrossFit could easily be dangerous. You are doing huge, compound, technical lifts and they do push you really hard. While our trainers have done a great job of watching over us at our gym, I can't say that would necessarily be the case elsewhere. Those kinds of lifts can go south quickly and put you in a world of hurt. You have to be extra careful with everything you do. Operating at that level of exertion with those types of lifts is bound to bite you if you ever let your down your guard. That's why CrossFit has a reputation for causing injuries.

Again, I want to stress how great the gym Melissa picked out was for both of us. We are considering renewing our membership for next month.

So. That's the end of the Paleo/CrossFit challenge.

Melissa and I will shut down everything with a screen at 9pm. We are doing this for two reasons. First, to sleep better. Staring at bright screens late at night inhibits your brain's ability to produce important sleep hormones, thus keeping you up at night. Second, to seize the night. How many nights do you waste away staring at a TV or computer? We asked ourselves that and decided the answer was "too many".

Top 5: Final, Lasting Conclusions from the Paleo/CrossFit Challenge
5. Paleo is a better diet than your typical modern-day Westerner's - but it's probably overkill for most peoples' circumstances.4. Thanks to Paleo, both slept better at night and felt better throughout the day.3. CrossFit is just as hard as I expected.2. I need to incorporate a High-Intensity Interval Training circuit into my routine.1. We were definitely in need of a healthier lifestyle; and doing something dramatic for a while taught us many new things that will allow us to draw our own conclusions about just how to achieve that.
Quote: “EAT A WHOLE PIZZA”- Event in my calendar scheduled for today. I did it. Now I feel bloated. -