I keep a backlog of ideas for the column. Every time I write, I draw from the backlog... but I don't always get through everything. Slowly the backlog fills. Right now, I have several Top 5's stacked up and a couple other random topics to talk about.
This is post is a menagerie of goodness.
First...
Over the holidays I got to play the board game Telestrations with my family. While playing, we discovered that my father and I have eerily similar thought processes when it comes to playing Pictionary. Check it out: 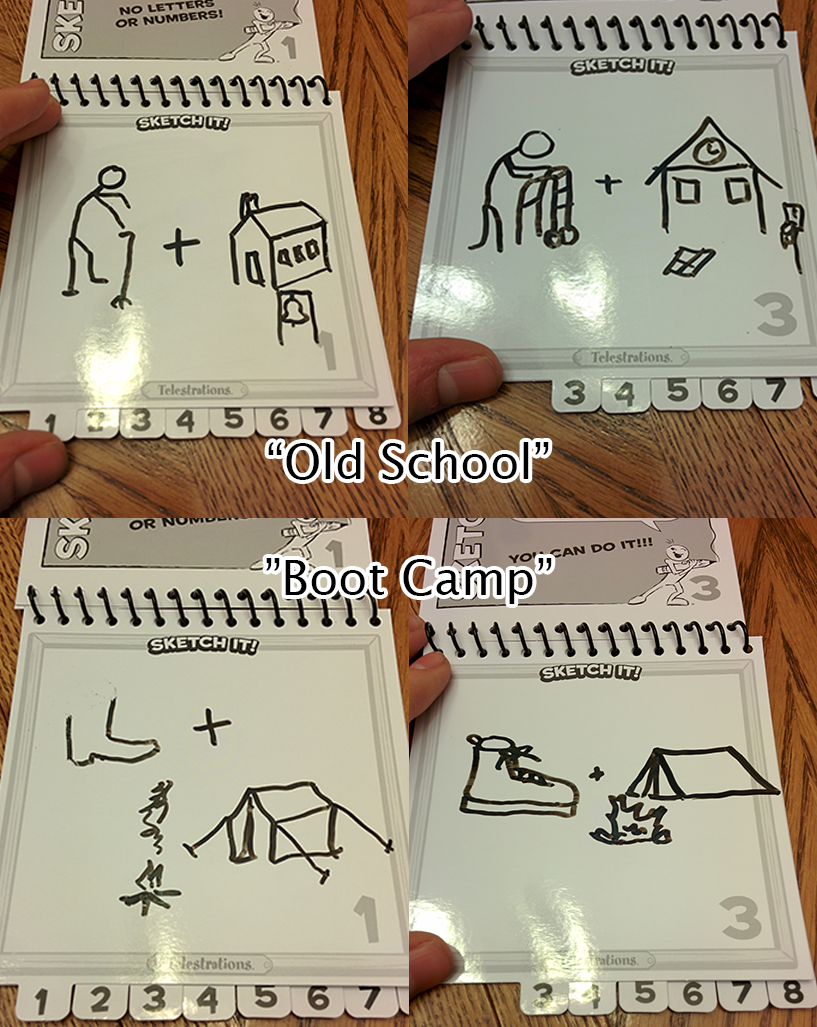 Which of those did I draw, and which did my dad draw? (Dad's were the better ones.)
Next subject...

I think people don't understand the Incredible Hulk as a character. At the climax of the Avengers movie, Bruce Banner turns into the Hulk and works with the rest of the Avengers to save New York. Now, I've heard several people point out how "convenient" it is that was able to control his rage at the end of the movie, but when he Hulked out on the helicarrier he was a monster.

What I don't think they get is that the nature of his transformation determines how the Hulk behaves. In the helicarrier, he was simultaneously injured and startled, turning him into a Hulk trying to defend itself from everything. At the end of the 2008's "The Incredible Hulk" that Bruce Banner (who looks way different back then) is seen meditating alone. Then, the audience sees that he has started the transformation into the Hulk voluntarily: 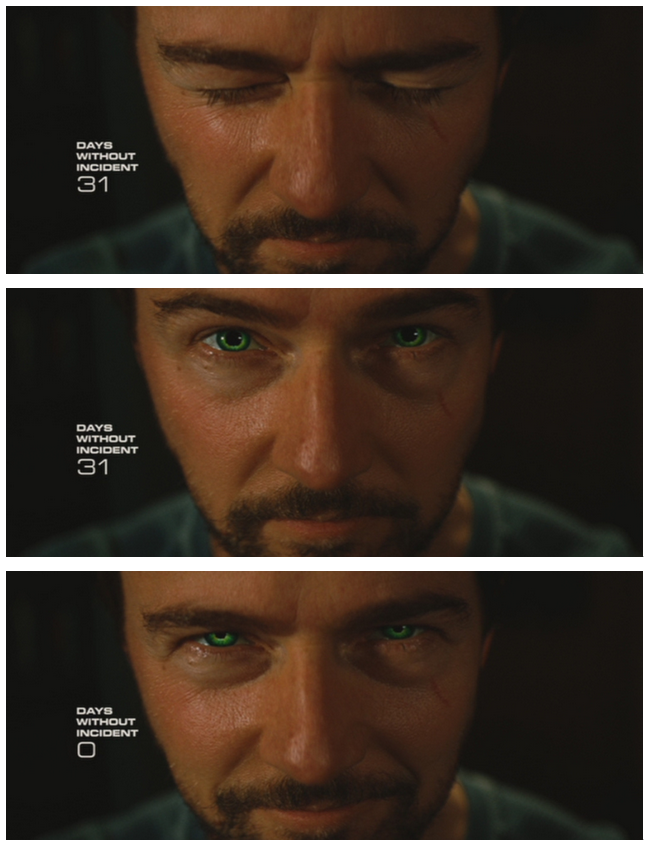 I believe that smile at the end is supposed to imply two things. One, that he is in control. Because is turning into the Hulk voluntarily, he is in control. Two, that he's accepted that the Hulk is a part of him. The second one doesn't have anything to do with my argument, but it does tie a nice little bow around the movie (in which he spends the whole time trying to fix himself and remove the Hulk).

Thus, when he transforms in the streets of New York, he's doing so on purpose. He is (mostly) in control as the Hulk. Also it helped that there were hundreds of Alien targets around for him to smash.

Next subject - which is actually somewhat related... 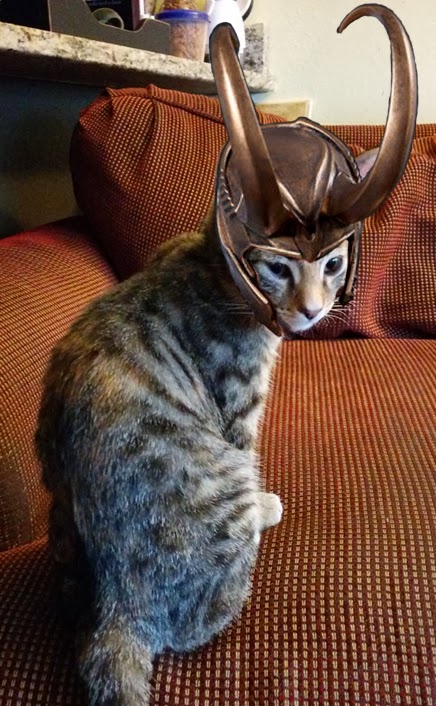 The following is a short list of objects nobody seems to appreciate as much as I do... or maybe it's just a list of things I over appreciate:

Waterbottles
Water is the elixir of life. Water is all important and I like to always have some with me; that's why I like a good waterbottle.

Bags
I love tools. Tools give you the ability to perform functions you couldn't otherwise do. To adapt an old adage from photography, the best tools are the ones you have on you. Bags let you keep more tools around and available. Pockets can only go so far. Also, bags give you a place to put the crap that you collect throughout the day. If manpurses were accepted as a part of Western society, I'd have one.

Smartphones
I've harped on this before. I'm not going to revisit it.

Top 5: Best Selling Water Bottles on Amazon
5. NALGENE Tritan 1-Quart Narrow Mouth - I own one and use it every day.4. Klean Kanteen Stainless Steel Bottle - I've never owned a Klean Kanteen.3. Hydro Flask Insulated Wide Mouth - Melissa and her family love this bottle. I'm jealous sometimes of its insulative properties.2. Nalgene Tritan Wide Mouth BPA-Free Water Bottle - I own 2 of these and use them every day.
1. Camelbak Eddy Bottle - I've owned 4 of these within the past 5 years. They are great, but I drink a lot of water; so I have to refill them too often. Also the mouthpiece is frustrating to keep clean.

Top 5: High-Level Benefits of Exercise (a.k.a. Why You Need to Exercise)
5. Exercise improves your quality of sleep. You fall asleep easier and wake up more rested. Basically, exercise does what bed commercials tell you their beds will do.4. Exercise makes you look good. Although diet is much more important, exercise is still a vital component. This leads to better self-confidence and self-esteem.3. Exercising gives you more energy throughout the day.2. Exercise helps boost your mood!1. Exercise helps prevent disease. Exercise has been shown to reduce the risk of developing heart disease, diabetes, arthritis, depression, certain cancers, and much more.

Top 5: Companies I Won't Buy from because of Their Stupid Ads
5. Old Navy used to be on this list. Their commercials in the mid-2000's were horrible.4. GoDaddy - domain registry has never before so heavily leaned on the "sex sells" mantra. It makes no sense and, more importantly, the ads are annoying.3. The first two are weak because I had to come up with them off the top of my head. The next two are the reason I wanted to write this.2. Geico - Those commercials with the talking paintings. They are atrocious. They are on Hulu and I see them every day. Every day I tell Hulu they are not relevant to me. Every day I mute it. I've been subjected to them enough. Thus I refuse to save 15% or more.
1. Jared Galleria of Jewelry - "He went to Jared". No, I didn't and no I won't.

Top 5: Battles in Tech
5. Facebook vs. Twitter
4. AT&T vs. Verizon
3. Google vs. Apple2. Samsung vs. Everyone1. Microsoft vs. Microsoft

Top 5: Things I Want in My Future House 5. An awesome Battlestation work desk. This was my first priority when I started buying my own furniture, and I'm sitting at mine right now. Positively no regrets. I love it. 4. A woodshop and gym in the garage or barn. I've already got a pretty solid outline of how it would be laid out and what components each of them would have. 3. A really nice and small media room. One couch. One large TV. Surround sound. Everything run through one internet connected blu-ray player with Chromecast capabilities (Chromecast capability is going to be built into things in the not-too-distant future). 2. A shower I can stand up in. Stand all the way up. I want the water to hit me in the top of the head, not the throat. 1. Melissa, 2-3 kids, a dog, and maybe a cat.
Quote: “There are few things graven in stone, except that you have to squat or you're a wuss”- a sign in the bathroom at the CrossFit gym -