Motto: What a Marvelous Accomplishment
Preface:
Before I get started I'd like to let you know that I'm writing this in a coffee shop. The following video reflects my current situation:

Okay, now that's done. Either strap yourselves in or bail out now. This column is going to be spectacularly nerdy and long. I'm writing exclusively about the Marvel Cinematic Universe (MCU). Please note that while this is not the first time I've written about this subject, today's post will be more specifically focused on the MCU.
A Brief History of the Marvel Cinematic Universe:
The MCU is a series of movies (and a television show) produced by Marvel and distributed by Paramount that exist in the same shared universe, each telling their own story while contributing to a greater, overarching narrative. Specifically, this:

Those are all the current and confirmed future MCU movies. I didn't include the television show "Marvel's Agents of S.H.I.E.L.D." in that graphic because it doesn't really fit at one discrete point within the timeline (and because it's a TV show).

A quick word of warning: my writing will assume you've already seen everything to date and will include spoilers for those who haven't.

Why is This such a Big Deal?
Comic books have a long history of using a shared universe, a continual continuity The people, locations, and plotlines from one story connect to the other stories... it's so obvious, but for some reason nobody has successfully done that on-screen. At least not until 2008, thanks to Marvel and Kevin Feige. 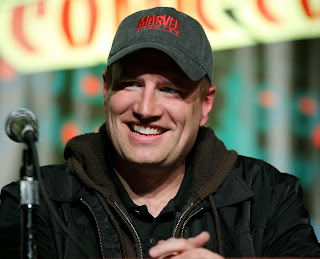 I listened to a great interview with Kevin Feige (warning: that interview contains strong language) the other day. I was nervous going into it, nervous that he would be weird, antisocial, or otherwise unlikable. I was pleasantly surprised. He was as entertaining as he was knowledgeable. 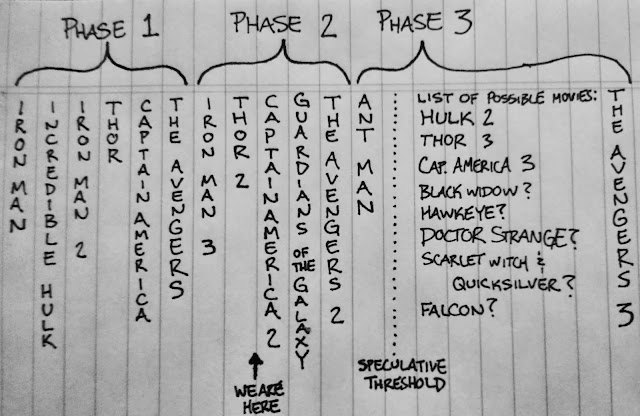 This timeline starts May, 2008. The speculative threshold is in July 2015. At the time of this post, we are sitting at a spot right between Thor: The Dark World and Captain America: The Winter Soldier. There have been roughly two movies a year, every year (2010 and 2012 are exceptions with one movie each). Phase one consisted of six movies. Phase two will have five. Phase three is years away, but will likely be ~6 movies long. This means we are about halfway through.

In order of decreasing likelihood, here are my predictions for movies we are likely to see in phase 3:

1. Ant Man - This one is the only officially announced movie in Phase 3. It will introduce us to Henry Pym. It will likely be the funniest of all MCU; and I have no idea what the story will be.
2. A Doctor Strange movie, detailing the origins of the Sorcerer Supreme.
3. A Mark Ruffalo Hulk Movie. I have no idea what the story will be. There are tons of Hulk storylines.
4. A 3rd Captain America movie, with a strong focus on S.H.I.E.L.D.'s other members as well. This may pull in characters from the TV show, but it also may not.
5. A Black Panther movie is also heavily rumored. Who knows.
6. And there's the chance of a Thor 3.

I look forward to coming back to these predictions in 2 years to see how I did.

I think it would be a wise move for them to pack in as many movies as possible into phase 3 before the Avengers 3. There very well may be a phase 4, but I have a feeling that viewership may drop some. Viewers will be completely full-up with the awesomeness that was the Avengers 3. The story will be huge and it will be hard to follow. More on that later.

Keep in mind, the movie that I liked the least (Iron Man 2), I still very much liked. I don't do percentages, but if I did they would only go down as low as maybe 80%.

I have no idea why Thor 2 was so poorly received... I thought it was great.

What's the deal with the TV show?
Marvel's Agents of S.H.I.E.L.D. picks up where the Avengers left off. The show follows agent Coulson and a small team of up-and-coming S.H.I.E.L.D. agents as they deal the fallout of the alien invasion of New York and a world where superheroes exist.

The TV show opened really strong. It was the most-watched premier in something like 5 years, and the actual show was pretty good. If you could look past the cheesiness, it was good. The next 3 or 4 episodes were, to be nice, pretty bad. The characters were one-dimensional. The stories were self-contained - they didn't seem to really further any sort of greater narrative. Viewership dropped.

It's slowly getting better and I sincerely hope it continues to. I really want the TV show to work out. In order to do that, they are going to need to start driving towards a larger plot. They need to develop an enemy that lasts for more than one episode. They need to work on character interaction and fill out their backstory. Most importantly, they need to show that there is a master plan and they aren't just wandering aimlessly with each story.

I have faith. I'll stick with it at least until the end of the season. I'm sure they are going somewhere with this... Maybe.

Some subtle things I've noticed and come to appreciate:
Here is where the spoilers from Thor: The Dark World lay - during my second watch in theaters, I noticed a couple different subtle things that contribute silently to the shared universe.

Firstly, the Dark Elves from Thor have displays that very closely resemble those invented by Tony Stark and used in Iron Man: 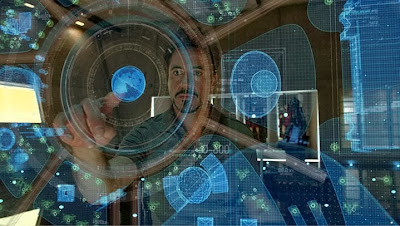 This probably is not lazy writing. This is not a lack of imagination. This is a hint that our technology is approaching the "magic" that exists in the other realms. As Thor said in the original Thor movie, "your ancestors called in magic, but you call it science."

The next thing I noticed - in Thor: The Dark World when the Aether takes over Jane Foster her eyes go completely black for a moment. Later, the aether is shown to have an affect on her mind/behavior. Where else did we see this exact same thing? 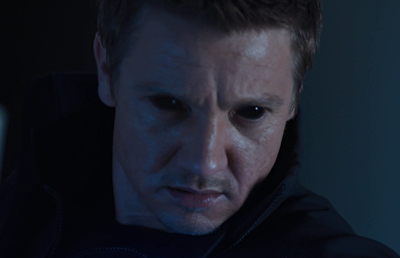 That's a still from "The Avengers". When Hawkeye is having his mind entered (and subsequently controlled) by Loki's scepter his eyes briefly go black - just like Jane Foster in the new Thor. Having this exact same effect helps show the audience that these stories are related, the mind-control effects are related, and the Tesseract and Aether are related.

After that point (since the beginning of phase 2) Marvel has been playing the long game. Thor: The Dark World was not a setup for "The Avengers: Age of Ultron" - it was setup for the third Avengers movie - and it all has to do with the Infinity Stones.

If you read nothing else in this column, read this next paragraph.

The Avenger's 3 will be the culmination of all of the MCU movies up to that point. It will be modeled after a six-issue comic book series called "The Infinity Gauntlet" in which the Avengers gather to fight Thanos who wants to use the collective power of the Infinity Stones to kill literally everyone and everything.

The Infinity Stones (or, as they were originally called, "the Infinity Gems") are six immensely powerful objects in the Marvel Universe. Without going into their lengthy backstory and Marvel's mythology too much, each infinity stone grants its owner completely control over one aspect of the Marvel multiverse. Anyone who possesses all six infinity stones is granted omnipotence, omnipresence, omniscience, and God-like power.

Here's a quick TL;DR breakdown of the Infinity Stones:

Each of those sentences does not not fully explain the powers and capabilities of each stone, but it should give you a pretty good idea.

As confirmed by Kevin Feige, the Tesseract (from Captain America and the Avengers) is the Space Stone. The Aether is referred to in Thor: TDW as an Infinity Stone - but which Stone it is never is explicitly stated. People are guessing it's the Power Stone due to its color and the nature of what Malekith was going to do with it.

In the Avengers 3, Thanos will collect all six Infinity Stones, inlay them in a gauntlet (glove, basically) and use them to basically mess up everything and everyone.

Beyond Phase 3:
Marvel has decades and decades of stories and hundreds and hundreds of characters to pull from. They are open to continuing beyond Phase 3. Part of me hopes they do, and another part hopes they don't. They have already made history. The Avengers trilogy will make history over again. Beyond that there will be some major obstacles they'll have to overcome. The actors playing their characters are getting older. They can't play their parts indefinitely. They do have a shelf life. So, do you recast? Do you reboot? Do you write it into the story? Does Tony Stark pass on the Iron Man suit to some successor who is the star of future Iron Man movies?

Also, they will possibly "jump the shark" with this whole Infinity Gauntlet thing. Trying to keep on going after that will be even harder than keeping on after the original "The Avengers". This is why I'm most hopeful they do Avengers 1 through 3 and then call it done.

Editorial Note on My Previous Writings:
I re-read Column #82, the original Feature Column on superheroes I wrote way back in April several times while I wrote this one. I wanted to share a few notes/corrections from that post.

1. I wrote a ton. I did that again with this post, but hopefully dividing it into sections and add colorful pictures made it a bit easier?
2. The picture that I posted in that column is no longer displaying. That's because I didn't re-host it on this blog, I just pulled it directly from the source. Because it's gone now, I've taken steps to prevent this from happening again in future posts. I did this a lot in the past now that I'm looking back... it's a shame.

Postface:
I don't do features very often because they tend to take several days to write. In the case of this feature, it took me 8 days to write. I started it way back when it would have been a normal, timely update, but I couldn't finish it. To make matters worse, I once lost about 1/2 of the post on a bad save 3/4ths the way through the project.

Top 5: Things I'm Hoping for in the Second Half of the Marvel Cinematic Universe
5. That all the actors, writers, producers, and directors live long enough to finish out the rest of the project.4. That nobody else pulls a Norton and forces themselves out of the project.3. The introduction of new characters doesn't dilute the presence of those we already have and love. New characters can and should be introduced - but they need to be done in the right way. I don't claim to know how that's done; but I do know it's possible.2. That the TV show "Marvel's Agents of S.H.I.E.L.D." ends by finishing the story they want to tell, instead of by cancellation. Keeping this in mind, I hope that it has no more than 3 seasons. The first 6 episodes haven't been overly compelling.1. They stop making movies before the run out of stories that make sense together, characters that fit well, actors, or inspiration. As soon as any one of those go, the others will surely follow.
Quote: “I'm like Aaron-level excited for 'Thor'”- Melissa, while we were on the way to watch the premier of Thor: The Dark World -