I got Google Fiber. 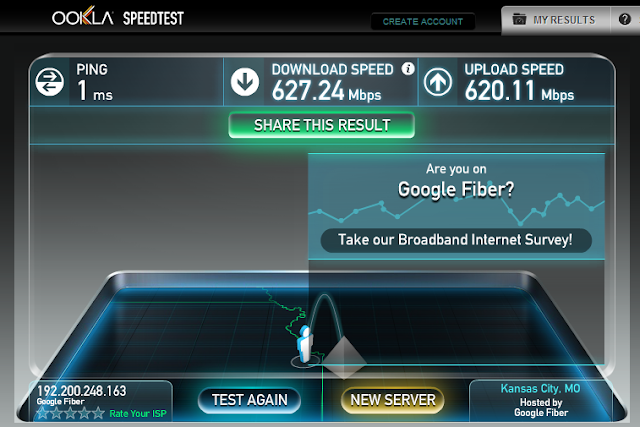 For those of you who don’t know what those numbers mean - the nationwide average internet speed is often quoted as 5 Mbps down and 1 Mbps up. With Google Fiber, I’m sitting at 12,545% and 62,011% those figures. I uploaded 22GB worth of Music and Videos to the cloud yesterday. It took about an hour. At 1Mbps, it would have taken 2 days and an hour. I know this because I just mathed a little.

I’d like to say “it’s completely changed everything about how I view the web!” But, it hasn’t really done that. The connection has been somewhat inconsistent. It varies from “absolutely fantastic” to “just good”. 1080p YouTube videos either never stutter at all, or they stop to buffer every 7 or 8 seconds. I haven’t yet figured out any rhyme or reason why the inconsistency exists.

SEAMLESS TRANSITION FROM GOOGLE FIBER TO MY DISCUSSION OF CABLE-CUTTING

With Google Fiber, I now have the first DVR that I’ve ever had access to. I’m not a big “TV” guy, but having a DVR is still pretty nice. Having said that - I still don’t see the advantage of watching a recorded show or movie over watching a show on Hulu or Netflix. I have a very strong opinion about TV, and you’re about to hear it.

For those reasons, after I leave Google Fiber territory, I’m definitely not going to pay for TV. I’ll get the 4 or 5 channels that come for free through the air and that’s all I’ll need.

And now for something completely different

I own a GoPro action camera. People who own those are obligated to make sweet videos like the following (this video is a 30 second obligation that will explain the video following).

So, anyway, I finally fulfilled my obligation. See below:

I have heard rumors of an upcoming GoPro improvement. By the next update I suspect I will no longer have the latest and greatest model. Stupid technology, always getting better.

There was some feedback after Wednesday’s “shortest Column ever” post that I have have been considering. The reason I went to the “write on a schedule” vs. “write when I feel like it” was to force myself to write creatively about a wider array of topics. To force myself to think about and conclude things I hadn’t already done and share those things. That’s the zen. When enforcing a rule like that, though, I’m bound to fail on occasion. Wednesday was not a great example of the kind of post I like turning out. This isn’t really up to snuff either, though. This post is too long. Too broad.

Anyway, that’s why I am writing on schedule. That and also because I like it for accounting purposes. 104 columns a year. Simple. Easy. Accountable. (I’ll try to bring the entertainment to the table a little better from now on, though)

I’m still interested in transforming the Column here into a feature on a full-blown website. Sometime in the future WVZ7X7.com might become a possibly maybe reality maybe.

Oh, one last thing, Marvel’s Agents of S.H.I.E.L.D. is playing. It wasn’t bad. I suggest watching it. On Hulu.

Top 5: Events Hypothetical Worldwide Pentahalon that I’d Have a Chance of Winning

“I find television very educating. Every time somebody turns on the set, I go into the other room and read a book.” Groucho Marx