EDITOR’S NOTE FROM THE FUTURE. This was lost to history.

Google’s Autoawesome feature on Google+ stitched together several photos I took to make that animated GIF. Autoawesome is awesome.

Speaking of GIFs, there was a weird resurgence of my JIF GIF again three days ago.

I woke up and read the column I posted on Wednesday. I clicked the “JIF GIF” link from the Top 5 and scrolled down. I found this:

That’s an Australian kid that looks like a scrawnier, more braces-having version of me doing a cover GIF using a cleaning product they have down there called “JIF”.

Later that same day, the very popular and well-established site “Imgur.com” created a community on Google+ called “Best of GIFs”. Their inaugural post made my day. 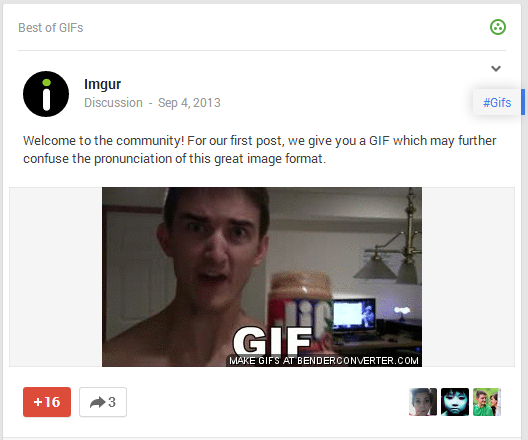 I know I wrote about the JIF GIF a couple of posts back. I don’t want to keep writing about it. So I’m going to stop.

This weekend was great. Productive. Fun. The works.

I told you this was going to be short.

Top 5: Companies I Refuse to Support Because of Their Stupid Ads