Two days ago the words “KitKat” and “Dominion” conjured up no real response in my brain. In the past 48 hours, KitKat and Dominion have SKYROCKETED in importance in my life.

Android has been named in alphabetical order after deserts since the debut of 3rd generation of Android, which was named”Cupcake”. This is what followed:

Out of the blue Google announced Android 4.4 was going to be named “KitKat”. Nobody was predicting an announcement and nobody predicted the name was going to be “KitKat” - the rumors pointed to “Key Lime Pie” (which sucks).

KitKat and Google worked this deal out last year. No money was exchanged either way in the deal - and that’s awesome. The people at KitKat had enough warning to create this great video:

In other news, I recently learned to play the board game “Dominion” thanks to my good friend Danielle. It quickly superseded all other board games to become my favorite. I liked it so much that I downloaded an Android app that let you play against computers. I played so much in such a short amount of time, I knew I had to delete the app or I would start to hate the game for sucking up so much of my life.

So I just bought a physical copy of the game. Who wants to play? 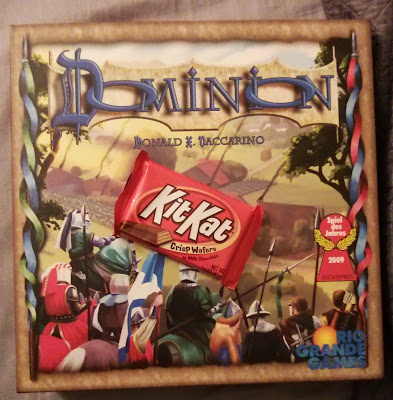 Top 5: Quick Ways to Find Me on Google

“Those look like ‘Magic: the Gathering’ cards” Melissa, taking all the wind out of my sails