Motto: The Horse is Never Dead

I love technology. People who know me know this. I get asked about different tech-related things fairly often (which I love, please never stop asking) and my advice always changes with the current technological landscape. This column is about one of my oldest and most consistently-given pieces of advice:

If at all possible, don’t mix technological ecosystems.

Here’s what I mean by that:

Don’t try to sync your Android phone with iTunes running on your Windows 7 computer, don’t try to make your Chromebook play well with Microsoft Word, and please God don’t try to run Google Docs on Internet Explorer with your Macbook.

In general, each of the three biggest software competitors offers its own solution for just about everything you need. Here’s what I’m talking about - 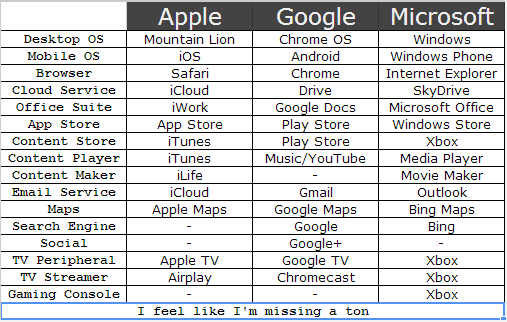 So, who should you choose? I’ve already written about this in Column #44, but it was crazy long.

Apple Pros: Apple provides a unique opportunity to stay within an ecosystem on both the hardware and software side of things. They have the perfect mix of simplicity and complexity. They are beautiful, integrated, and optimized. That’s their appeal.

Living 100% within Apple: If you have the money, it’s easy to see how you could live solely within Apple’s ecosystem. Buy a Macbook Air, iPad Mini, and iPhone 5. Use iTunes & iCloud. That’s it. You’re set.

Google Cons: Google is weak when it comes to offline services, multimedia creation, and that’s about it.

Living 100% within Google: Buy the Samsung Chromebook, New Nexus 7, and a Moto X. Use Google Docs and Drive with ChromeOS. Unfortunately, you won’t be able to create any serious photos, videos, or music without some other system. I’m waiting on Google to make something like Apple’s iLife. Maybe someday.

Microsoft Pros: Microsoft has everything.

Microsoft Cons: Microsoft has everything, and has done a terrible job of integrating it. It’s products and services exist under half a dozen different brands and don’t work well together.

Living 100% within Microsoft: Buy an Xbox, a PC from a random manufacturer, get a Windows Phone and live to regret all your terrible decisions you sadist.

That’s all for that.

If it weren’t for Android development, data encryption, and video editing I’d sell this laptop in a heartbeat for a Chromebook and some change.

Then again, I forgot how capable the Nexus 7 is. I just grabbed mine and swiped Melissa’s bluetooth keyboard for a second to write this paragraph. It works just as well.

“We have to steal the bad guys secret weapon that he’s hiding in the back room of an all-night rave club!” A generalized quote that is at the beginning of every episode of Alias