Life gets boring if you let it. You can preclude boringness in millions of ways, some healthier than others. I like to make changes to things. Change systems. Change setups. Change routines. Change sometimes for the sake of change.

A change I wanted to try out, at least for a while, was making the Column a regular thing. As I mentioned in my post two days ago, I am going to change the update frequency on the Column from “whenever I feel like it” to every Thursday and Sunday.

Seems like a good change. I’m going to try this for a month or so, just to see how it feels.

And now, for something entirely different.

A good friend of mine has an birthday fast approaching. She took some time to reflect on her previous year and decided she wanted to make what she called a “bucket list” for the upcoming year of her life. I decided I like the idea, so I decided to do what I do best: blatantly and unashamedly copy the idea I like.

Here’s a sampling of my Bucket List for my 25th Year: Watch a KU home basketball game Watch a KU away game Go to St. Louis for a weekend Enter in a pool tournament Enter in a race of some sort Write an Android application I want to do all that.

(and, you know, buy a car and get married and stuff)

Just a warning, what follows this line is nerdy and has an admittedly small intended audience.

If you aren’t using Google+ already, you should be. That is my standard preface for any Google+ related news. The news is that the Google+ App is getting an update that I’m reasonably excited for. The biggest changes include the removal of the vestigial “Messenger” app and the new optional integration with photos and videos stored in Google Drive. Considering I have a terabyte of Drive space and hate app baggage on my phone, I’m pretty happy.

I just deleted 3.1 paragraphs about other Google+ stuff. This post is wordy. Here’s a screenshot of my Google Drive picture folder “2013” in Google+: 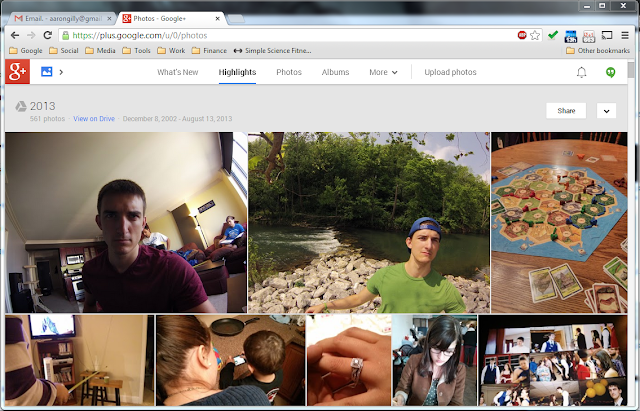 Your Google Drive pictures are private until you choose to share them. I recently watched a video of XKCD author (and one of my personal heroes) Randall Munroe giving a talk at Google (another personal hero, albeit a corporate one). During this talk someone asked him about the name, “‘XKCD’, what does it mean?” He gave the answer that I already knew, it is meaningless. It’s just the name he’s always used. We went on to talk about why it is what it is. He said his goal was to find a “unique point in the space of four-character strings”. When he was looking for a name, he wanted something that met the following criteria: No letters could be mistaken for other letters or number in either case No obvious acronym decoding Not pronounceable When you Google it, you only find things that are related to (me) I love this idea. So, I decided to blatantly and unashamedly copy the idea I like.

Here were my base criteria:

So I relaxed a bit on the first criteria.

So I relaxed a bit more on the first criteria.

So I relaxed even more on the first criteria.

The lowest return for a set of 5 letters and numbers I could find was 149 results for the string “J7RX5”.

That’s still 15 times more results than I wanted, but it’s the best to this point.

I’m going to skip a step and say that, according to my experimentation, to return less than 10 results on a Google search, you need to have at least 6 letters and numbers.

If you find out I’m wrong, tell me what string you used. I want it.

Note that all the strings I’m listing anywhere in this post will eventually up the number of results they yield.

Top 5: Best Strings I Could Feasibly Use

“Are you from this country? … You are the tallest man I’ve ever seen.”a guy from a foreign country that I couldn’t quite place said this to me on the elevator